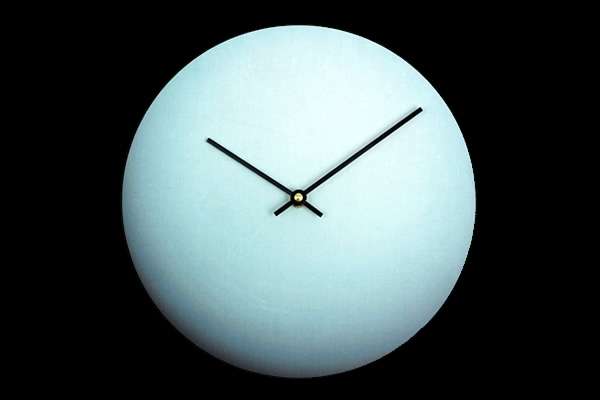 Understanding of the cosmos runs deep, and it is a recursive engagement that oftentimes takes several lifetimes to journey through. The heavenly bodies travel in circling patterns repetitively, but no exact moment of the spiraling patterns is the same.  For example, Venus entering Leo in a few weeks will be under a different set of astronomical circumstances than when Venus entered Leo in 2017.  Each astrological body orbits cyclically, but the positions of each body in relation to each other is the core of knowing how the planets’ energies affect us currently.  When it comes to matters of timing and positioning, Uranus embodies these elements.

Although Uranus has been in the earthy sign of Taurus for almost a month now, its entrance set the mood for the next 7 years of innovation and creativity. Named after the Greek sky deity Ouranos,  Uranus was discovered during Pisces season, which makes sense due to its intuitive focus in astrology.  It is dimly visible to the naked eye and is known for its widely erratic weather patterns, having the coldest atmosphere of all the planetary bodies in the solar system.  Unlike other planets, Uranus tilts sideways on its axis, almost parallel to its solar pathway.  With 27 known moons, some scientists are puzzled as to how they don’t crash into one another, another sign of its internal, intuitive recognition.

In astrology, Uranus represents being in tune with the current instant. It is the energy of acute focus on the moment, trusting the flow, and improvisions. Being in the present moment may not fit within the set “rules” in place, so Uranian energy lets go of form in favor of the present moment. Just as Uranus looks lopsided on its axis, with an intuitive system controlling a plethora of lunar sattelites, the icy, gaseous planet breaks away from order by simply existing. Uranus creates the impulse of transformation, the sense of craving change and forward motion.  Uranus looks for information and transfers that energy to your life path.

The impulse of Uranus entering the sign which rules Earth (Taurus) positions the need for innovation and impulse on the materiality of this planet. Uranus in this sign is really about environmental intelligence and connectivity. One cannot be in the present moment by being detached from the environment around them. It takes the awareness of the environment to create new roads of doing intuitively. Uranus looks to change forms, and forms are integrated with Taurean motions of structure and grounding. Transforming how we engage with the earth. Being in the present moment involves mind, body, and soul, in all the erratic shifts that occur, knowing that there is always the alternative for change; a way out comes from being in tune with the surrounding environment.

Lately, I’ve been thinking about how we as cosmic beings can think of the planets as affective bodies that influence what’s happening on earth and the entirety of the universe. Uranus in Taurus is the perfect time to shift planetary consciousness to include a more cosmically connected universe, one that affects our bodies, emotions, spirits, and consciousnesses. Knowing the astrological climate of the present moment brings us closer to this unified consciousness, and the more we are aware of the planets’ universal effectiveness, the more we know the present moment of our beings.

I pulled a card from ig: artxman’s Manzel’s Tarot. And, I pulled the Ace of Cups: 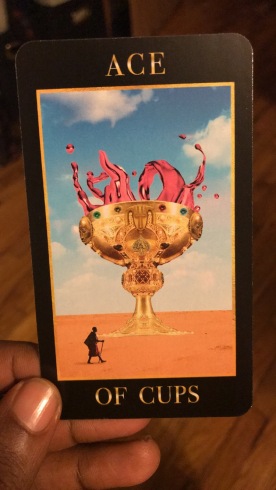 The card pictures a person walking in a desert-like place, and a golden chalice overflowing with liquid in the background.  The Ace of Cups is about newness in relationships with other people and innovation in creative ideas. Now is the time to be involved in the present moment and take advantage of the opportunities around you. If there is nothing new, look at your environment with new eyes and appreciate what is present. Plant new greenery and enchant your environment. As Uranus transits through Aries (retrograde) and Taurus, don’t shy away from risks and opportunities due to the ego’s stance. Let go and trust the flow until your cup overflows.